The brief from the client was to arrange an intimate event for 15 bloggers and social media influencers to attend the launch of the new Ridgeback Mischief Sparkling Wine. The event included welcome drinks and canapés on arrival, a tour of the farm with Viticulturist and Winemaker, Toit Wessels, a visit to the 4-star Ridgeback Guesthouse, a winemaker-led cellar tour and formal tasting of the range of Ridgeback wines, followed by a harvest lunch with the Ridgeback team. 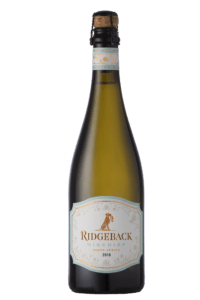 After years of planning and tweaks to the final blend, the award-winning Ridgeback Wines in Paarl has released their highly anticipated “mischievous” bubbly. A delicate blend of tropical sauvignon blanc and daring viognier, the Ridgeback Mischief 2018 will be available in time to celebrate the festive season…and beyond.

Lush canopies, carefully controlled irrigation and night harvesting ensure the integrity of the delicate tropical flavours which form the core of this delicious sparkling wine.

“The immaculate grapes of both varieties are destemmed only to press under reductive conditions,” explains winemaker Toit Wessels. “The sauvignon blanc was fermented in stainless steel tanks for 21 days, while the viognier component was also settled for 48 hours before being racked to barrel where fermentation started naturally. A short 60-day period of lees contact enhances the mid-palate while still retaining the appealing tropical character of both components. Great care was taken to retain the delicate flavours by careful reductive juice and wine management from grape to bottle.”

Wessels says they were looking for something refreshing and light, almost spritzer-like, when creating Mischief, “something one could enjoy a few glasses of without feeling as if one had overindulged”.

He says the reason they used viognier in this sparkling wine is because this variety lifts the fruit in any wine and adds to the complexity providing the component is not excessive.

“The name Mischief was chosen because it creates the feeling of being carefree and somewhat naughty,” says Vernon Cole, estate owner, “much as our mischievous Ridgeback dogs! As far as the label is concerned, the weaver nests in the willow trees around our dam are synonymous with the estate and gives a sense of tranquillity and relaxation. The proteas are my wife, Lesley’s, favourite flowers and are found throughout the farm.”

The Ridgeback Mischief 2018 offers a fresh, upfront, tropical array of lime, pineapple and green guava which evolves to hints of orange blossom and citrus on the palate and a flinty minerality lingering on the aftertaste, adds Wessels. “It is ideal for any form of celebration and suits lighter dishes, summer salads and sushi or grilled, lightly seasoned white fish.”

The Ridgeback Mischief 2018 is dry and has an alcohol content per volume of 12,5%. It sells for R95 at the Ridgeback tasting room.

Vernon Cole has the final word on the Ridgeback Mischief 2018: “This wine is aimed at everyday consumers looking for something light and refreshing at a reasonable price. We love the idea of opening a bottle and forgetting about the rest of the world as you pass into a state of tranquillity, fun and humour. Let’s not take life too seriously!”