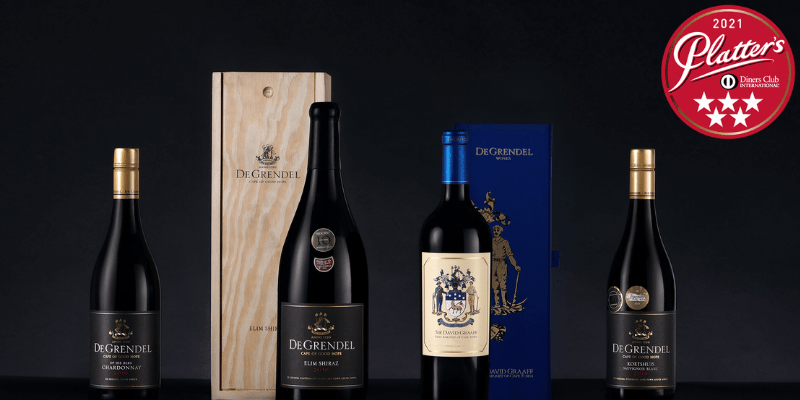 De Grendel capped its 300th anniversary year with the achievement of a new milestone – a remarkable four five-star ratings in the 2021 Platter’s South African Wine Guide.

“A year ago we received our first-ever Platter’s five-star award. To boost that to four five-star ratings this year, along with no less than seven 4.5-star ratings, is an absolute highlight and a truly significant milestone that shows we are achieving excellence across our range, and consistently so,” De Grendel cellar master Charles Hopkins said.

The four De Grendel wines were among just 212 to be awarded five stars, out of the more than 8,000 wines rated and reviewed in the 2021 guide, and De Grendel was one of only 13 wineries to have four (or more) wines receiving the top rating.

“I always say winemaking is a journey, in which one never stops enquiring and learning and trying to improve. Success is not a one-off destination, it’s about the steps taken along the way to grow a brand, building quality and reputation. The multiple awards received for our wines this year, and now these coveted Platter’s five stars, is evidence that we are moving in the right direction – the journey is far from over, but De Grendel has certainly reached a major waypoint on a journey two decades in the making,” Hopkins said.

Although the De Grendel farm is 300 years old this year and has been in the Graaff family for four generations, as a winery it is relatively young, with vines planted in 2000 and the first wines released in 2004.

Hopkins said it was also significant that the Platter’s five stars were received for wines from different areas, highlighting De Grendel’s success in identifying new wine-making areas for particular varieties – from Africa’s southernmost tip to the Ceres mountains 300km inland – while also building up the estate’s home vineyards in Durbanville.

Koetshuis Sauvignon Blanc 2019 takes its name from the vineyard planted next to the historic coach house (“koetshuis” in Afrikaans) on the De Grendel farm, while Elim Shiraz 2018 draws on grapes from the cool maritime climate of Elim, close to Cape Agulhas, that produces the alluring fragrance and black pepper intensity of the sought-after rotundone style of Shiraz.

Hopkins was one of a pioneering group of winemakers who recognised the area’s potential, particularly for cool-climate Shiraz, and planted vines there more than 20 years ago. First released in 2016, Elim Shiraz has already attracted regular local and international acclaim.

In another pioneering move, De Grendel was first to produce wines from the high-altitude continental climate of the Ceres Plateau, almost a kilometre above sea level where the vines are often blanketed in snow in winter – producing the five-star Op die Berg Chardonnay 2019.

Rounding out the quartet of De Grendel’s five-star wines is the estate’s legacy wine, Sir David Graaff 1st Baronet of Cape Town, made to honour Sir David De Villiers Graaff, the farm boy from Villiersdorp who started his business journey at the age of 11 and became a widely respected leading entrepreneur, politician and farmer.

He bought De Grendel in 1891 and set the family legacy in motion, and the wine is made “in remembrance of the responsibility bestowed on his children by his legacy”.

Produced in limited quantities and intended to age for 20 years or more, reflecting the values and exemplary character of the first baronet, the wine is made from shiraz, cabernet sauvignon and petit verdot harvested from vines 30 years and older, their maturity, stability and low yields producing wines of outstanding quality and longevity.

Hopkins said he was delighted that a further seven De Grendel wines received 4.5 stars, meaning a score of at least 90 points and the status of “outstanding”.

De Grendel wines are available in selected retail outlets, from the De Grendel tasting room, or online at https://degrendel.co.za/collections/our-wines